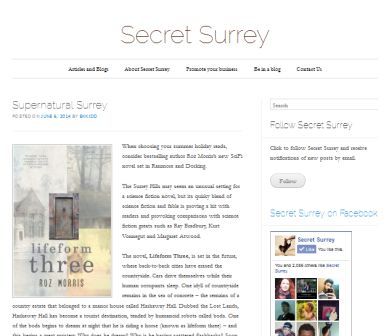 The Surrey Hills may seem an unusual setting for a science fiction novel, but its quirky blend of science fiction and fable is proving a hit with readers and provoking comparisons with science fiction greats such as Ray Bradbury, Kurt Vonnegut and Margaret Atwood.

The novel, Lifeform Three, is set in the future, where back-to-back cities have erased the countryside. Cars drive themselves while their human occupants sleep. One idyll of countryside remains in the sea of concrete – the remains of a country estate that belonged to a manor house called Harkaway Hall. Dubbed the Lost Lands, Harkaway Hall has become a tourist destination, tended by humanoid robots called bods. One of the bods begins to dream at night that he is riding a horse (known as lifeform three) – and this begins a great mystery. Why does he dream? Why is he having scattered flashbacks? Soon he is thrown into a nightly battle to reclaim his past and his soul.

The author, Roz Morris, says she was inspired by the landscape of Dorking and Ranmore.

“The woods and paths around Polesden Lacey, Norbury Park and Denbies are full of clues about the kind of life that was lived when those houses were prospering estates. Norbury Park has a pair of grand gateposts down on the floodplain that now lead to a farm. When I researched them I found that a manor house stood in that area, which was then rebuilt high on the hill where the present Norbury Park is now. But the gateposts remain as an enigmatic ghost. And Denbies has had several magnificent mansions on the top of the hill overlooking the vineyard, before the private house that stands there now. Near Dorking there is an underwater dining room, the last remnant of another country house. The dining room is still there, with access via a tunnel and an island. I wanted to write a story to explore the wonder of these vanished places and the people who lived there. Also, I’m a horse owner, and have come to know the area by exploring it on horseback. Many of the bridlepaths are ancient byways, and as I rode them – on this most traditional form of transport – I felt very connected to the history and the land. But this fantastic natural space is vanishing too, and I wanted to remind us to cherish it.“

Reviewer reactions to Lifeform Three include:

‘Engages from the start, never falters and carries the reader to their destination with startling strength and speed‘
John Whitbourn, Award-winning author

This site uses Akismet to reduce spam. Learn how your comment data is processed.