While you look outwards to the future and space, what might be happening on our little blue-green planet? Interview at One Giant Read 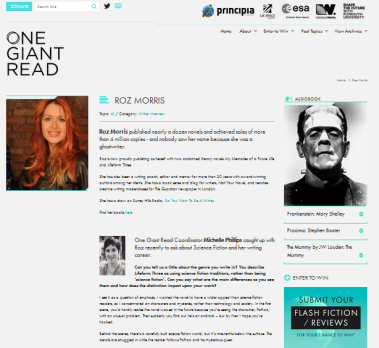 Can you tell us a little about the genre you write in? You describe Lifeform Three as using science fiction traditions, rather than being ‘science fiction’. Can you say what are the main differences as you see them and how does the distinction impact upon your work?

I see it as a question of emphasis. I wanted the novel to have a wider appeal than science fiction readers, so I concentrated on characters and mysteries, rather than technology and society. In the first scene, you’d hardly realise the novel was set in the future because you’re seeing the character, Paftoo, with an unusual problem. Then suddenly you find out he’s an android – but by then I hope you’re hooked.

Behind the scenes, there’s a carefully built science fiction world, but it’s nine-tenths below the surface. The details are smuggled in while the reader follows Paftoo and his mysterious quest.

I used this approach in my first novel too (My Memories of a Future Life). It has a dual narrative – one in contemporary England and the other in an underwater city in the future. Again, I developed the underwater city in detail, but I kept it unobtrusive to blend with the rest of the narrative. Readers seemed to like that style so I used it again for Lifeform Three.

The science fiction traditions I followed? I like Ray Bradbury’s definition: ‘Science fiction is any idea that occurs in the head and doesn’t exist yet, but soon will, and will change everything.’ Perhaps that’s an invention like the slow glass in Bob Shaw’s Light of Other Days, or an affliction that means we lose control of our environment, as in John Wyndham’s The Day of the Triffids.

One tradition I channelled with Lifeform Three was the android story that examines what it is to be human, asking questions about empathy, free will, memory and emotions. Blade Runner is the gold standard, but more recently there’s Alex Garland’s Ex Machina and Spike Jonze’s Her. In Lifeform Three, the androids are called ‘bods’. Their minds are wiped to make them productive. But it also stops them developing more complex needs.

This leads to another question. If we create an intelligent organism, there’s an assumption that we’re entitled to use it as a slave. We’re still examining how we got to slavery before, but it looks as though we’re about to create it all over again with intelligent machines. Have we not learned? Mary Shelley explored this in Frankenstein – if you create an intelligent creature you have a responsibility to it.

This is why I feel science fiction is so relevant to us all, and why I try to reach beyond its traditional readership. Even if it explores other planets, at heart it’s a voyage to our own humanity. Look at Andy Weir’s The Martian. (Actually, don’t. It might disconcert Tim Peake.)

The relationship between science and my work? When I was at school I was just as inspired by science subjects as arts. I took O level physics because I wanted to understand atoms, electronics and radiation, having seen them for years in SF novels and films. I liked to play ‘what if’ – I remember a long correspondence with a pen-pal trying to figure out how a teleport could work and what else you could invent with that technology. And science can take you to richer stories too – for instance, the extraordinarily moving Flowers for Algernon by Daniel Keyes begins with an experiment to increase human intelligence.

I’m less of a geek now, but I enjoyed playing science mind-games for Lifeform Three.

There were two main subjects – environmental concerns like global warming, and our burgeoning use of AI. I imagined a future when our landmass had shrunk so much that we’d built on every scrap of grass. Would we mind? I concluded, reluctantly, that many of us wouldn’t as we increasingly live in cyberspace. I’ve always loved the countryside and the National Trust, and I ride horses, so that idea made me sad. That’s why I chose to set the novel in the last surviving country house estate – a piece of the past, preserved for everyone to enjoy.

And if you want more parallels, the bods are like the servants who used to run these vast estates.

Gadgets and AI raise some important questions. They’re helpful and necessary, but they make us adjust our minds. When I type on my computer keyboard, I express myself differently from the way I would on my phone, where the predictive text attempts to help (and usually doesn’t). As a writer, my prose is my identity – but predictive text alters what I say and how I think. It limits me. Sometimes a word simply can’t be used. Think what George Orwell might say about that.

As research for Lifeform Three, I watched TED talks about future technology. One idea I came across was the tag cloud on a T-shirt. When you meet a stranger, a set of floating words suggests conversation topics. No more awkward pauses! But what about the things that aren’t on the menu?
I magnified this for Lifeform Three. Everyone has a device called a Pebble. I chose the name because I wanted it to sound cute, organic, like a natural thing or a friend. But this friend is Big Brother. It knows your needs more accurately than you do. It suggests the ideal birthday gift for your husband. When you text a friend about a life crisis, it’s on hand with a lawyer or therapist. So the humans of Lifeform Three are just as programmed as the bods.

Do you recognise this? Are Facebook, Twitter and websites showing you promoted posts instead of what your friends are doing? I love the internet, but it’s channelling what I see.

Lifeform Three examines where this might end up. In the future, will we ever have a thought that isn’t scripted on a menu? Will we ever have a relationship that isn’t match-made by an algorithm? So far, that sounds benevolent, but it’s the kind of psychological conditioning we’ve been warned about by Orwell and Huxley.

If someone doesn’t fit the norm, what happens? We’re not very tolerant of people who don’t conform – especially if we find them disruptive. And that’s the real sting in Lifeform Three. The people conform because they chose this technology. The bods conform because they have no choice.

Technology throws us new wonders and new challenges. We might assume that computers and AIs are our slaves, but are they? Science fiction can explore how it might really be.

Are there any particular writers who influence the way you write?

Too many to list. Lasting influences are Ray Bradbury, as you might have guessed by now. His work shines with originality and humanity. Nevil Shute is another. The first novel of his I read was On The Beach – a poignant, dignified end-of-the-world story. Of the hard SF writers I admire Philip K Dick for bending memories and the soul. Away from SF, John Steinbeck and William Somerset Maugham give me impossible but stimulating challenges – their characters are so interestingly broken. Elizabeth Taylor does too (not THAT Elizabeth Taylor). Gavin Maxwell and Verlyn Kinkenborg are my two angels of the wilderness, and reassure me that we haven’t forgotten the fields, forests and animal companions – yet.

At One Giant Read, we like to ask authors how they started out and what advice they can give aspiring writers. Can you tell us a little of your story as an author and if you could give aspiring authors one piece of advice for getting that first novel published, what would it be?

I’d been scribbling for years, but didn’t take it seriously until I married another writer. Suddenly it was natural to have a book on the go – and there was no stopping me. My first break, though, was as a ghostwriter – I rewrote a book for a publisher and became a reliable writer for hire. I published about a dozen novels under top secret conditions (so I can’t tell you what they are) but I didn’t feel I’d earned my spurs until I released a novel under my own name.

One piece of advice? Rewriting is the big secret. Really good books aren’t just a string of well-chosen words; they’re a hidden mechanism of structure and characterisation as well. Learn how to critically appraise your novel.

Astronaut Tim Peake is currently aboard the International Space Station on his six month Principia mission. Can you imagine yourself exploring space on this kind of mission?

Definitely. As a child, I lived near Jodrell Bank radio telescope. I could see it from my bedroom window. It moved all the time. Sometimes it was a bowl facing up into the air. Sometimes a half bicycle wheel. Sometimes it looked directly at our house, a giant white eye. I’d watch it, trying to catch it move as it tracked a vast mystery beyond the clouds. So space has always seemed real to me.

But I might prefer to postpone my trip until space travel is more comfortable. Playing in zero G would be a hoot, but I wouldn’t be so good with the cramped quarters. And I wear contact lenses so I’d be sure to have a myopic mishap. But if we can please wait until science has sorted that out – and with something less scary than lasers. I’ve seen the laser malfunction scene in Logan’s Run.

Where to buy Lifeform Three